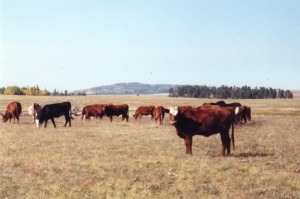 Cows have been absolved of causing global warming with their methane emissions. I think they still emit just as much methane as before, but a new study has shown that their grazing on grasslands can cut “emissions of a powerful greenhouse gas: nitrous oxide.” (Does it seem ironic to anyone else that climate change fanatics are in a tizzy about the over-production of laughing gas?)

According to an article in the online Telegraph.co.uk, cows, once noted as the greatest source of methane production on the planet, have been found to make up for that by their grazing. A study of grasslands in China revealed that when the grass is long, the snow lies atop it, trapping heat and moisture on the ground which encourages the growth of microbes in the soil, and those microbes produce the nitrous oxide. When the grass is cropped by herbivores like cows (I love cows) the snow settles close to the ground, freezing it and thus compromising the environment conducive to microbe proliferation.

Down with microbes! Has anyone measured the carbon footprint of microbes? I understand they are quite active in tropical and swampy areas. And rice paddies.

Actually I also recall reading a study a few months back that said the greatest source of CO2 was not man, but the soil itself, breaking down as it aged. There is an awful lot of aging soil on this planet…