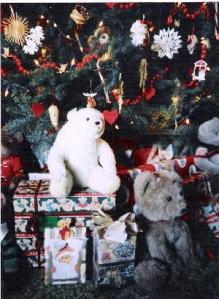 When I was growing up, and to this day, my family had a Christmas tradition that was unusual. I say that because when asked what we did “on Christmas” there was always a degree of shock in the asker when the answer was, “we spent all day opening packages.”

Maybe people thought we had SOOO many gifts it took us all day to get through them, but that wasn’t/isn’t the case. We didn’t have a big family — mother, stepdad, sister and me — we had a ritual. A couple of them actually.

The first was Christmas eve where we had lasagne for dinner and then arranged packages around the tree. When all was in the most “artistic” arrangement, we turned off the lights except for candles and tree lights, got some egg nog and sat listening to Christmas music and looking at the beautiful tree. Mormon Tabernacle Choir, Andy Williams’s Christmas album and more recently, Narada’s Medieval type music created a delicious “Christmasy” feeling. Mostly we just looked and sipped and listened and didn’t do too much talking.

All of that, I understand now, are typically introverted pleasures. We were soaking up all the stimuli — tastes, smells, colors, lights, the glory of the tree in the darkness, each individual ornament (and most were unique), the music, the holly berry scent of the candles, maybe a warm blanket…

Next morning we came out, looked at it all and then began our second ritual. One person would be designated the package distributor and each person would receive a gift to open. Then one by one we went around the circle, each opening in turn, noting the paper, ribbon tag, carefully unwrapping the gift in almost the same order it had been wrapped and finally opening the box to reveal the gift within. At which point considerable conversation would ensue, regarding the story of acquiring the gift, or why it was wanted, or other such things, some related and some not… This was not forced on any of our parts. We liked to draw it out and drink it in. To savor and enjoy all aspects of the process.

After a couple of “rounds” we’d go make breakfast and eat it. Then back to finish up the remainder of the packages. By then it was early afternoon and time to start dinner.

Given what I’ve seen in movies as well as what seems to have been the holiday modus operandi for most people who I’ve come in contact with is to rip into the gifts in a wild frenzy all at once, the whole thing over in half an hour.

That seemed so terribly unsatisfying to us, but our way certainly did seem to be “weird.” We’ve continued a reduced version of it into adulthood, though my husband being one of those who, growing up in a family with 8 kids, came from the ripping frenzy tradition had some adjusting to do. He has been tremendously gracious in adapting and taking part in the full spirit of the thing (though at times he does grow drowsy!). Anyway, he reported similar responses from people when they asked and he told them how we did it — weird!

Then, a few weeks ago I opened a book call Introvert Power by Laurie Helgoe, the same day I’d received it from Amazon to read this in the Introduction:

“I was number nine out of ten bright, creative, and mostly LOUD kids. My dad, an eccentric genius, had wall-sized speakers in the living room that blared out classical music. When the family sang together, we sang five-part harmonies of the uncompromising Handel’s Messiah. On Christmas Eve, we had a talent show and family service, and later tore into our presents all at once, paper and ribbons flying everywhere and voices crisscrossing the room shouting out “thank you!” and “just what I wanted!” These are happy memories, because there was a part for each of us. But instead of ripping paper and shouting, I sat in my corner with my pile of gifts and handled each as a treasure, slowly and carefully opening them, preserving the paper and lingering in the delight of discovery…..”

Whoa! I was absolutely astounded. There it was. Just what we did, without all the flying paper and yelling!

“However, when there were no gifts to open and everyone was competing for airtime, I felt invisible and became overstimulated and anxious. My anxiety was not about the pressure to socialize; there were more than enough bodies to take care of that. I became anxious because I couldn’t think, and, without my own mind, I felt like I was disintegrating. My solution was to retreat to my room and write. In my solitude I could regain contact with myself and become solid again.”

Thankfully I didn’t grow up with nine siblings, but I have certainly felt this sense of being unable to think, especially recently where I’ve had so many things demanding my attention. But the retreating to my room to write and imagine stories… Yes! I couldn’t wait to get home from school and do that. She goes on to say she wrote science fiction (ditto) and developed secret codes (ditto) to share with her sister (I shared with a friend)… the entire introduction continued in this vein, highlighting things about myself I knew existed but had never really recognized as part of introversion. Nor had it ever occurred to me that there were reasons why I was always exhausted after social interactions, even those I enjoyed,  and that it wasn’t because I was bad, or defective or just plain ornery, but part of how God made me to be.

I have been so excited to read both this book and the other one I ordered, The Introvert Advantage, and I hope to share a bit of what I’ve learned from them both this week. The challenge will be to distill the most important bits from the wealth of things I could say about it all.

2 thoughts on “A Christmas Tradition”