Last week, the Reid Park Zoo held a fundraiser for the elephants, by inviting 100 members of the Zoological society to sign up for an early morning breakfast with our new baby elephant, at long last christened “Nandi” (nahn’-dee). As soon as the email appeared in my inbox, I clicked on the link to sign up — and a good thing. One of the other attendees told me the event was sold out in two hours. 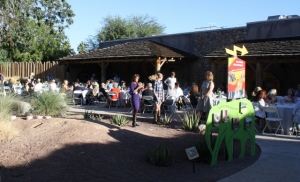 We arrived at 7:15 in the morning, well before the zoo opened, and after checking in at the gate were directed to the back of the property where the elephant habitat “Expedition Tanzania” was situated. There in the extensive educational area, they had our breakfast waiting for us: fresh fruit salad, orange juice and coffee, French toast with pieces of apple, scrambled eggs with cheese, hash brown potatoes with sweet potatoes, onions and bell peppers (I think) and ham and bacon. The serving dishes were black iron skillets set atop towers of bricks in the midst of which were the warming elements. It was all very nice and very tasty.

As we finished up eating, the keepers came out to tell us about the elephant project. Our zoo is one of only five in the nation to support a breeding herd of African elephants, making the arrival of a new baby a rare event. They also shared stories of little Nandi — of her birth and how easy it all was, how quickly she was on her feet — within fifteen minutes, I believe they said.  How in the days after her birth they struggled just to get her out of the barn… 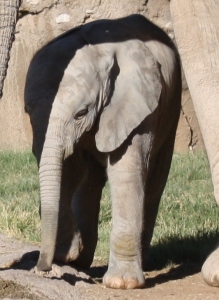 Thankfully she’s not having that problem any longer… 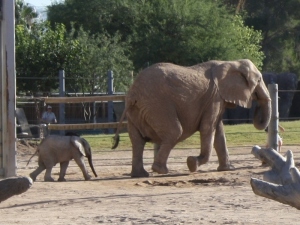 Another funny story involved one of Nandi’s brothers, the former baby, Sundzu, now three years old.  Semba has three offspring, all by the same father: Punga, a seven-year-old male, Sundzu, and little Nandi, at the time only a few weeks old. There is also another adult female in the herd named Lugile. She has been fascinated with Nandi from the start and is very motherly toward her, so the keepers have taken to calling her “Auntie Lugile.”

So they’d already introduced Sundzu and Nandi some days before this incident, and he’d been very nice, very gentle, and the keepers were feeling good about it all. But on this particular day, Sundzu was standing beside Nandi in the yard, Mom and Auntie nearby, but not paying attention to the kids. The keeper said Sundzu very clearly looked to the right where mom was busy stripping leaves from a stick, her back to the little ones. Then he very clearly looked to the left over at Auntie Lugile, who  was also occupied with her own pursuits, and seeing he was in the clear,  just like the three-year-old brother that he was, he smacked Nandi with his trunk and knocked her clean over!

Neither of the adults noticed him that time, though of course they came to see why Nandi was on the ground crying. Sundzu, of course, had no idea.   He got away with it so well, he naturally, tried it  again on another day… only that time he was caught and Mom chased him around the yard in discipline for some time!

Another cool thing we got to see is a daily ritual that occurs with all the elephants when the big bull elephant Mabu, (he weighs 12,000 lbs) joins the rest of the herd in the yard. All of them line up and walk over to greet him as he enters:

As they all come together, they pass by him in a line and touch him with their trunks, as he in turn runs his trunk over each of them. 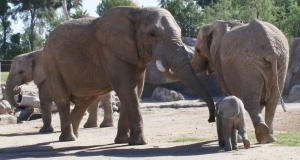 I think Mabu is just awesome. He is so big! What amazes me is how gentle they can be with the baby and how aware of her they are, despite their rather shocking size differential.

Anyway, it was a wonderful morning. I stayed well after most of the other people left, and took something like 287 pictures! 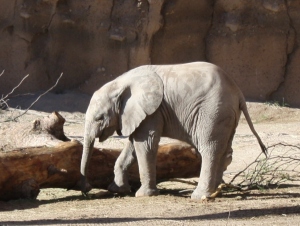 2 thoughts on “Breakfast with the Baby Elephant”