Keep a Quiet Heart is the name of one of my favorite Elisabeth Elliot books. The title comes from a piece written by a woman named Annie Keary who lived during the 19th century, a piece which is also used as the frontispiece for Elliot’s book. It is something I have kept coming back to repeatedly for the last almost twenty or so years. And lately it’s been more helpful than ever.  So I thought I’d share it here: 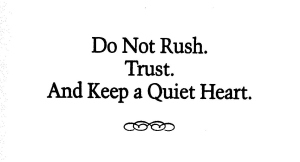 “I think I find most help in trying to look on all the interruptions and hindrances to work that one has planned out for oneself as discipline, trials sent by God to help one against getting selfish over one’s work. Then one can feel that perhaps one’s true work — one’s work for God — consists in doing some trifling, haphazard thing that has been thrown into one’s day. It is not a waste of time, as one is tempted to think, it is the most important part of the work of the day — the part one can best offer to God. After such a hindrance, do not rush after the planned work; trust that the time to finish it will be given sometime, and keep a quiet heart about it.”

Years ago, a friend gave me this tile that she got from the local  San Xavier mission gift shop. It sits against the pot of my ponytail plant just beyond the kitchen sink. I read it almost every morning and smile … 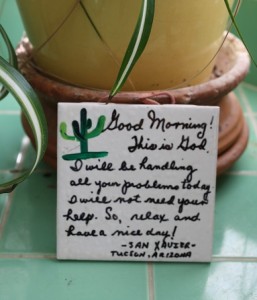 In case it’s too small on your device to read, it says, “Good Morning! This is God. I will be handling all your problems today. I will not need your help. So, relax and have a nice day!” ~ San Xavier, Tucson, AZ

The significance of the following quote from A Big Little Life by Dean Koontz did not hit me when I first read it back in October. It only caught my eye when I was paging through the book to write yesterday’s review — after I’d spent the day going through my world building notes:

“The second novel I wrote after Trixie came to us was From the Corner of His Eye, a massive story, an allegory that had numerous braided themes worked out through the largest cast of characters I had to that time, dared to juggle in one book…

“I don’t work with outlines, character profiles, or even notes. I start a novel with only a premise and a couple of characters who intrigue me. Therefore, I was daunted but also exhilarated by the prospect of showing (the) theme… in dramatic action, which is what a novel must do — show, not tell. The task seemed immense, but after leaping into new territory with [my previous novel], I learned that the more overwhelming a project seemed to be, the more FUN it was as well.”

He goes on to detail how he then came up with a first chapter that made some narrative promises that he had no idea how he could fulfill. Was he setting himself up for failure? Then he added,

“Over the years, when a story took a seemingly illogical or an incomprehensible twist, I learned that my subconscious or maybe my intuition was at work and that I should trust it.”

I think I needed to read that today. Because I’d already had, at the back of my mind, the awareness that all the questions I’d posed myself in my world building notes really didn’t need to be answered. That it wasn’t going to be a matter of me figuring out all the details and getting it all down in the notebook, as some advise, and then writing the story to fit. No, the story and the world in which they occur have always developed together, each affecting the other in ways I could never imagine at the start.

Some of the questions I’ve posed will be answered in the back of my mind, out of my awareness — it’s already happened. I just somehow come to a conclusion about what I want to do.

Some of the questions won’t need to be answered at all because they’ll turn out to have been irrelevant. Right now I have no idea which are which. But it’s nice, comforting even, to realize that my Lord knows and He is guiding me, and it’s not all up to me figuring it out right now.

Bottom line is, though I’m not entirely sure, I’m thinking it might be time to stop with reading through the notes and take up the story again, even if I don’t know exactly where I’m going. Just trust, not my subconscious nor my intuition but that my Lord who lives inside me is at work and will lead me where He wants me to go. 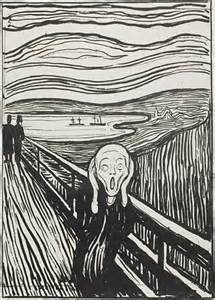 Yup. Have to say I agree.

Oh, this is even more true. More on this later.

“Writing, like life itself, is a voyage of discovery.” ~Henry Miller

Yes, indeed. Definitely a voyage, complete with wind, waves, rain, seasickness, dark miserable nights, getting lost, being pitched overboard, having huge fish swallow you, then vomit you up on a foreign shore you didn’t want to go to …Okay, I’m getting carried away…  But only a little.

“I never knew in the morning how the day was going to develop. I was like a hunter, hoping to catch sight of a rabbit.” ~ E. B. White

Amen to this! And when my hubby used to take me hunting I did the same thing then, that I do now… trudged up and down hill and dale in the Blue Wilderness after him, thinking there was nothing out there and we were just wasting our time and when could we stop this fruitless trudging and go home? In fact, it was on one such trek that was so fruitless and uneventful I spent the time coming up with a rudimentary plot for The Light of Eidon, figuring out Abramm’s name and Trap’s as well, if I’m recalling right…

Wait… does that mean maybe I found the “rabbit” after all, and simply didn’t realize what we were “hunting?” Hmmm…

Another bit from the John Cleese video I posted yesterday. I found this to speak directly to one of the things that has most bedeviled me:

I can only give thanks to our God that He has allowed me to have a case of shingles almost “in name only.” Its physical impacts have been so minimal, that except for the fact that two doctors have made confident diagnoses that I do in fact have it, I would feel embarrassed to even claim I did. The medications have worked flawlessly so far, their side effects also minimal.

The rash is nearly gone, and my eye looks and mostly feels back to normal, except for occasional zings of nerve pain in the left corner now and then.

But in spite of all that, things have conspired to keep me from the blog and the book. More on that in another post. For now, it’s late, so I’m doing another reprise from my old blog, this quote relevant to my current creative situation:

“Creativity comes in cycles. One month you’re churning out piece after piece, everything you put your hand to comes out fabulous. It seems like it’ll go on forever. You are the Productivity Queen! Next month you crash and burn. You can’t even bear to look at your studio, let alone make something. This is when you need to recognize the signs your body is sending. After a time of great creative work, your brain, spirit and body need a break. You’ve spent your creative energies and your well is dry. It’s time to recharge.”      ~ from Alexia Petrakos’s “How to Recover and Recharge from Creative Burnout” on Collective Creatives – a cooperative artisan blog

It’s sometimes comforting to know that other writers, famous ones, wildly successful ones go through the same trials the less famous and less successful do.

In case this comes up too small to read, here’s a transcription:

THIS IS INSTEAD OF TELEPHONING BECAUSE I CANT LOOK YOU IN THE VOICE. I SIMPLY CANNOT GET THAT THING DONE YET NEVER HAVE DONE SUCH HARD NIGHT AND DAY WORK NEVER HAVE SO WANTED ANYTHING TO BE GOOD AND ALL I HAVE IS A PILE OF PAPER COVERED WITH WRONG WORDS. CAN ONLY KEEP AT IT AND HOPE TO HEAVEN TO GET IT DONE. DONT KNOW WHY IT IS SO TERRIBLY DIFFICULT OR I SO TERRIBLY INCOMPETANT=

I love “can’t look you in the voice.”  And, “all I have is a pile of paper covered with wrong words.” I can relate to that.

On that subject (that is, piles of papers with wrong words), I worked on Sky yesterday and today, and am slowly moving through ch 3.  I have LOTS of papers with the wrong words on them. My consolation is that I also have a few papers with mostly the right words on them, and also, that all the work I’ve done on worldbuilding here, will pay off later. And it is coming together if roughly.

“Indeed, I can say with complete truthfulness that everything I have learned in my seventy-five years in this world, everything that has truly enhanced and enlightened my existence, has been through affliction and not through happiness, whether pursued or attained. In other words, if it ever were to be possible to eliminate affliction from our earthly existence…the result would not be to make life delectable, but to make it too banal or trivial to be endurable. This of course is what the cross signifies, and it is the cross more than anything else, that has called me inexorably to Christ.”   ~Malcolm Muggeridge

Thomas Malcolm Muggeridge (24 March 1903 – 14 November 1990[1]) was an English journalist, author, media personality, and satirist. During World War II, he was a soldier and a spy. He is credited with popularising Mother Teresa and in his later years became a Catholic and morals campaigner. (From Wikipedia)

When faced with two choices,

It works not because it settles the question for you,

…you suddenly know what you are hoping for.

Or, in my case, in that brief moment after  it lands and you see it’s heads, you know what you really wanted was tails!