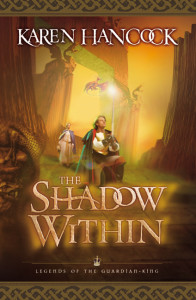 Book Two: The Shadow Within

Winner of the 2005 Christy Award for Visionary Fiction

Four years after his legend-spawning defeat of Beltha’adi, Abramm returns to Kiriath to claim the crown he thought he would never wear and prepare his people for the inevitable attack of the resurrected Armies of the Black Moon.

Though fiercely opposed by his own kin and reluctant to cast Kiriath into civil war at the worst possible time, he nevertheless believes this is the destiny Eidon has laid upon his life. And Kiriath’s only hope of salvation.

In the midst of this turmoil a headstrong princess from a neighboring realm endeavors to uncover Abramm’s secrets—including his heroic exploits as the White Pretender and the fact that he wears a golden shield upon his chest. Is she friend or foe, and will her interference bring Abramm closer to his destiny or destroy any chance he has of maintaining his rightful place as King?

Winner of the 2005 Christy Award for Visionary Fiction

“…as good as its predecessor, if not better…  Highly recommended.” ~Christian Fiction Review