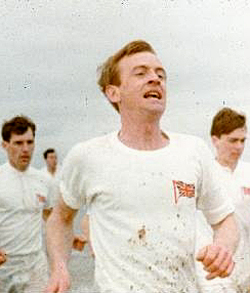 Eric Liddell as played by Ian Charleson in Chariots of Fire

At the end of my last post I embedded the beginning sequence from the movie Chariots of Fire, a 1981  Academy Award Winner for Best Picture, Screenplay, Score and Costume Design. It was a period piece about two British athletes in the 1924 Paris Olympics, one of whom was Eric Liddell, a runner and a Scotsman born in China of missionary parents (and later a missionary to the Chinese, himself).

A major part of the movie’s plot concerned Liddell’s refusal to enter the 100 meter race in the Olympics, an event in which he was likely to win gold seeing as he’d won the 1923 AAA championships in that distance in record-breaking time.

In the film, he’s portrayed as learning upon arrival in Paris that the qualifying heats for the Olympics 100 meter race would be conducted on a Sunday, and he, being a devout Christian, refused to break the Sabbath in order to race. In 1980, when I first saw this movie, I remember thinking he was being legalistic, that Sabbath-keeping is not commanded for church age believers and that he was unnecessarily letting his teammates down.

Yes, it was played for maximum conflict that way in the movie, with various teammates/coaches seeking to change his mind, and lamenting of the team losing out on a medal. He held firm, and did not compete in the 100, though he did run in the 400 meter race, a later race whose heats were not held on Sunday and which he was not expected to win.

He won that one anyway, in spectacular fashion and record time.

It worked for the story. But it wasn’t quite accurate. In reality, he’d learned of the 100 meter race’s Sunday qualifying meets months earlier and had decided long before he went that he would not be participating. So it wasn’t a big shock, and he wasn’t letting his teammates down at the last minute. Everyone knew what he intended from the start.  Even so, it still caused a stir.

Over the weekend, a reader sent me an email regarding my Olympics post, reminding me of Liddell’s subsequent missionary work and death in China in 1945, I got curious and looked him up in Wikipedia. (Eric Liddell)

He was an impressive man — giving, humble, compassionate, completely devoted to the faith and the Gospel, and really not a legalist at all. In fact one of his three daughters, Patricia, now 77, was recently quoted as saying her father “was not a stiff, rigid Sabbatarian. He was fun, probably liberal in a sense, and not to run on a Sunday was his choice.”

Having read of his life, and seeing the importance he placed on the Gospel and on ministry, my thinking shifted on the Sabbath business, especially in light of what I saw and experienced in watching the most recent Olympics. I can see now that in the big picture for Liddell, even had he won a gold medal in that 1924 100 meter race it wouldn’t have meant that much. But his having abstained from running did. It interjected into all the hooplah and worldly mystique of The Olympics, not that he was some pious and “holy” guy, but that winning a gold medal didn’t matter to him nearly much as honoring God. And there is something very significant about that, in a setting where everyone gets to thinking that winning a medal is IT, the ultimate achievement, the top of the heap, the epitome of glory. When it’s really nothing.

As my reader reminded me, sic transit gloria mundi: “the glory of the world passes away…” All flesh is as grass, here today, flowering, beautiful, then dried and gone tomorrow.  And in the end, all the medals will be destroyed along with all the rest of this fallen world.

What Liddell did later on in China was of far more significance than the 9.7 or less seconds of running a race and having a bunch of people cheer you. And in China, he did a lot. Who knows how many were brought to a saving knowledge of Christ through his efforts?

When the Japanese invaded in 1943, and foreign nationals were advised to leave, he stayed. He went to help his brother who was running a medical mission and needed all the help he could get; in fact his brother was ailing from overwork and badly in need of furlough. So Eric took his place and sent him home.

Not long after that he and many others were rounded up and put into a prison camp by the Japanese. There he directed the kids in various sports and games, taught their Bible classes, and helped out the elderly. A fellow internee recalled him thus:

“Often in an evening I would see him bent over a chessboard or a model boat, or directing some sort of square dance – absorbed, weary and interested, pouring all of himself into this effort to capture the imagination of these penned-up youths. He was overflowing with good humour and love for life, and with enthusiasm and charm. It is rare indeed that a person has the good fortune to meet a saint, but he came as close to it as anyone I have ever known.”

Eric Liddell died in that camp of what turned out to be an inoperable brain tumor. His last letter to his wife was written the day that he died.

But here’s the coolest thing, something unknown even to his family until 2008. That was when the Chinese revealed that well before his death, he had been offered the chance to go home as part of a deal between the Japanese and the British. He turned the offer down, giving his place to a pregnant young woman instead. When you consider that act of sacrifice alone, winning a gold medal for running a 10-second race seems startlingly insignificant.

The real Eric Liddell in the 1924 Paris Olympics