I mentioned a couple of posts ago that my hubby’s aunt had died and they were having a memorial service for her in Moab which we were considering attending.

Since it was “only” a nine-hour drive (without stops) we decided it was doable and left early Friday morning, heading out of Tucson fairly early. The memorial service was Saturday, and we drove home Sunday. With stops, the trip was twelve hours. Which wasn’t bad, but left both of us pretty tired Monday. I did nothing but lie around and it wasn’t until Tuesday that I began to put things away, try to get caught up on the things that didn’t get done and fuss about my rose bush.

I’d asked the neighbor to water, which she’s done many times before but somehow a soap can lid fell down behind the gate she needed to open and got it jammed so she couldn’t get in. Talk about weird… The result was that neither of the roses got watered for two days, during which our humidity was something like 13% or lower and the dew point was practically zero. One of them was droopy but recovered. The other lost almost all its leaves. It was very, very sad.

But after watering, fertilizing and laying down some mulch, it looks like it will survive… new leaves are now sprouting, so I’m happy about that.

In any case, that along with all the other things, which seem like nothing but end up taking up the minutes, took most of my time last week. Plus, Monday was Memorial Day and my hubby was home… so not only did I lack the time, quiet space and mental energy to write a blog post, I did no work on Sky either. I’m hoping to get back to it tomorrow, however.

For now, I thought I’d share some shots I took from our trip. 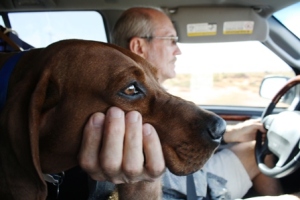 Traveling through Monument Valley I was shocked to see the rash of the white trailers and various structures which had sprung up at the bases of the rock formations. From a distance it looked like a scattering of trash. If only they’d painted their trailers and structures a color more like the surroundings… Ah well, I guess there’s no place left that’s immune to development these days. Maybe the Sahara Desert. Or the Gobi…

Redrock cliffs in the waning sunlight as we neared Moab

Driveway and cliff view from the house of hubby’s relations where we stayed.

Fabulous log fence and field of yellow flowers nearby.

Amazing cottonwood tree on the grounds of our hosts

my poor sad, dried up rose as it looked when we first returned… 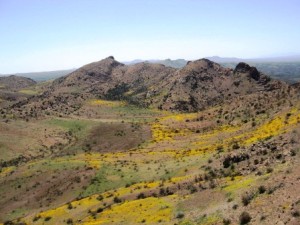 If I am to liken writing a book to fighting a battle, or preparing to build or whatever, it is important that one count the cost. To do the recon first. If you send soldiers out into the field and tell them okay, I want you to explore all this region and map it for us, since we have no map, and I want you complete that in three weeks – that would be a ridiculous assignment. No one knows what’s out there. A more reasonable assignment would be to send the people out to map for a particular period of time. Then evaluate what they have and decide the next step. External factors may demand decisions be made on less than complete information, whereupon the outcome becomes far less certain.

Might need to have a number of recon assignments before you are ready to launch any kind of operation.

In book writing, you never really know the terrain until you’ve actually written the first draft. You can stand at the edge of the unknown territory and see there’s a mountain there, a valley there, a canyon there. You can surmise what you will find, and you can estimate a route. But until you are actually down there and walking through it, you cannot know how it will go, where it will go, what you will encounter, etc. So I think it is time to plot the book, try the first trip through the wilderness and see where I end up.