Well, we’re back from a week in California, staying in a hotel near Old Town in San Diego for my son’s wedding which took place Friday on the beach near the Hotel del Coronado on Coronado Island. The same place the Navy SEALs trained in Lone Survivor.

We drove over on Tuesday because I was to attend a Bridal Tea on Wednesday afternoon, while my husband played with the boys at the Surfing-lesson and barbeque Bachelor Party down at the beach (Stu thinks it was Mission Beach in San Diego). Below’s a picture of my husband and son with their boards… 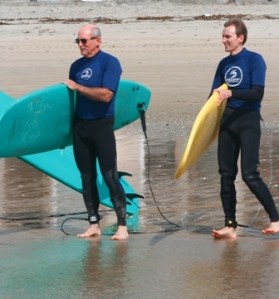 First time ever for my husband so he was quite stoked at the prospect of getting to do this.

Thursday we took Quigley out to the dog beach on Coronado island. I walked the beach while Stu walked with the dog. The dog beach isn’t all that big, and I really, really like to walk along the surf for quite a ways, so that’s what I did. Thursday night was the rehearsal dinner and Friday was the wedding.

I don’t have any pictures of that. We brought the camera, but neither of us used it. When we discussed it on the way home we found ourselves in agreement — when you’re trying to use the camera you end up not really being in the moment and we’d rather be in the moment at events like this. (the photo above was shot by the professional photographer that came with the surfing lessons!)

The wedding was held at 3pm on the beach. We were all barefoot, the breeze was steady, they said their vows with the breakers crashing in the distance behind them on a clear as a bell, perfect day. The bride was gorgeous, the groom handsome the setting unbeatable and the proceedings went off without a hitch. Then it was off to the other side of the strand and the reception in the community center. It was a very nice community center. The room had two adjoining walls that were nearly all windows, looking out on the harbor at the sail boats and cruise ships passing by.

Dinner, dancing, cake, visiting… they worked hard on setting up the seating at the tables and we got to talk with my new daughter-in-law’s father and sister and a couple who were longtime friends of the father. Likewise our longtime friends, Kelli and Richard were seated with us at the same table, so it had a nice symmetry to it. My aunt and uncle, and my stepmother were seated with the bride’s grandparents and uncle, the latter now living in North Carolina, right where my stepmother grew up. I think it went well.

When we danced the Mother-son dance, I didn’t worry about my sandals sticking to the floor, just took them off and went barefoot. And we danced to one of my favorite songs — You Raise Me Up, not the Josh Groban version, but the original Secret Garden version with Brian Kennedy. It’s not intended to be a dance song I don’t think, but I enjoyed it all the same and Adam did too.

Here’s a video (with a rather strong discrepancy between the sound and the video) of the first time that song was ever performed:

Sometime around then they cut the cake and passed out the cupcakes –all decorated with ganache sea shells and starfish– which had been baked by the bride’s mother and stepfather. Amazing job!

After some more dancing and visiting, it was over. The guests went outside to make a “tunnel of love” for the newlyweds to run through, and off they went.

The next day, driving home, we both commented that it almost didn’t seem real. Like something in a movie, or a dream…  Just as it almost doesn’t seem real that our son is now a married man, we have a lovely daughter-in-law and a new season of life has begun.

3 thoughts on “Wedding on Coronado Island”