Some of you may recall that two years ago in April, when Quigley was about 4 months old, he had a speck blown into his eye that required eye surgery and two weeks of recovery wearing an e-collar. (Which disintegrated the morning of the last day he had to wear it.)

Well, it’s April again, and it has been very, very windy. Sunday Stu and I were discussing whether the way Quigley was sort of closing his left eye while he watched us eat, and pretended to doze, meant anything. Monday evening, as I was preparing to go out for our walk, the light was just right as Quig came up to me and I saw a bump on his cornea with a little blood vessel-looking thing snaking out to it. Later, Stu examined him with a strong light and said it looked like some sort of reddish covering.

So this morning I called the Vet Specialists, with visions of surgery, a two-week recovery, and an e-collar dancing in my head. I took him in at 9:15 and… as usual, my speculations were wrong. I don’t know why I bother with speculations. They are ALWAYS wrong. Anyway, I sat in a chair in the corner of the examining room and held him with the help of two veterinary technicians while the doctor numbed his cornea, turned out the lights and examined his eyes. Quig was pretty good about letting her do it, too. Eventually she determined that the speck of plant matter had probably been in there for over ten days. Thankfully it had not penetrated his cornea and she was able to brush it away with one of those little paper spears. After the administration of a few more drops and a treat for Quigley, we were on our way.

We brought home a bag of three different types of eye-drops that we’re to continue administering multiple times a day. After he got home, before the numbing wore off, I went out and bought a new e-collar in case he started rubbing his eye later on when the numbness wore off. Well, day’s end is here and he’s not rubbed it once that I’ve seen.

I love it. Nothing is ever what I expect it to be, it seems. And God knows that so well. Forget about expectations, He seems to be saying to me. And just trust me for however it’s going to turn out. 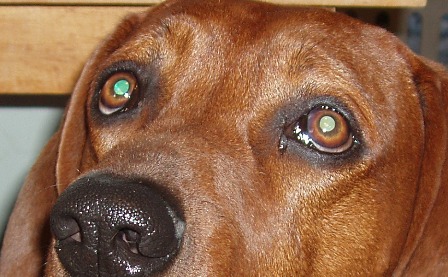 0 thoughts on “Another Speck”