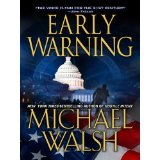 Over the weekend I started reading a book called Early Warning by Michael Walsh, who used to be music critic for Time magazine. (It shows – he sneaks in all sorts of musical references, like naming a character after a character in the opera Turandot or using Elgar’s Enigma Variations to introduce a discussion about cryptology). The biographical material at the back of the books says Walsh was born on the US Marine Corps base at Camp Lejeune, comes from a long line of American servicemen dating back to the Spanish-American War, and grew up among veterans and intelligence officers in duty stations around the world. Which grants him a degree of credibility for what he’s writing about.

Early Warning is a “Jack Bauer novel”… that is, its set-up is very much the same as that of 24 — the hero, supersecret operative “Devlin” is part of a supersecret security agency buried in the National Security Agency, a man who pretty much answers to no one but himself and has direct access to the president whenever he wishes. I’m only about a third of the way through, and the story is apparently a continuation of earlier tales, but it seems Devlin may have as traumatic a history as Bauer has ended up with. Anyway, I’ve been enjoying it.

And then on p100 I came to a part about wiretapping, which is no longer about faux telephone servicemen connecting wires in boxes, but is in fact, more like the Kraken released from its lair (we saw Clash of the Titans recently)… a many tentacled beast far beyond our ability to control. I knew we were on our way to this situation; I did not realize we were there.

Here’s what Walsh says, writing in the thoughts of one of his characters, the director of the NSA:

“The Black Widow was the in-house nickname fo the NSA’s Cray supercomputer at Fort Meade. Forget privacy — no matter what the sideshow arguments in Congress were about the FISA laws or civil liberties, the Black Widow continued to go remorselessly about her job, which was to listen in on, and read, all telephonic and written electronic communication, in any language, anywhere in the world. It was the old Clinton-era “Echelon” project writ large, able to perform trillions of calculations per second as it sifted and sorted in its never-ending quest for key words, code words, patterns…

“…The Black Widow not only heard all and read all, she could sense all: the technology had advanced to such an extent that the Widow and other Cray supercomputers like her — including the Cray XT4, known as the Jaguar, and the MPP (Massively Parallel Processor) housed at the University of Tennessee– could read the keystrokes of a given computer through the electrical current serving the machine. And all linkable.”

Well at that point I put down the book and went Googling. I’d thought the Black Widow might have been made up but what about the Cray XT4 Jaguar?

Real. Even has its own Wiki article here.

And so, to my surprise, is the Black Widow. Here. And here.

Note in both of these  latter references, one of which is the Cray Press Release, there’s nothing directly said about spying, other than the fact that these highly advanced supercomputers are provided to the government… presumably for research, since that’s all that’s mentioned in the release.

I did find some references to spying in a book review in the Baltimore Sun by David Wood. Reviewing The Shadow Factory by James Bamford, Wood says,

“Most convincingly, Bamford guides the reader through the NSA’s greatest challenge: staying ahead of the explosive growth in volume and types of communications.

“Voice traffic alone increases 20 percent a year. Digital cell phones and fiber-optic cables vastly complicate the eavesdroppers’ job. Today, the NSA’s colossal Cray supercomputer, code-named the “Black Widow,” scans millions of domestic and international phone calls and e-mails every hour. That’s harder than it sounds: For purposes of speed and encryption, many of these communications are transmitted in fragments. The Black Widow, performing hundreds of trillions of calculations per second, searches through and reassembles key words and patterns, across many languages. Storing all this data, Bamford reports, is already an enormous headache for the NSA.”

Since this was not an article on the NSA but a review of a book about the NSA, and since it seemed these words were only here reported as having been written by Bamford in the book, which I’ve not read, I went looking for corroborating information.

And came across ECHELON : ” a term associated with a global network of computers that automatically search through millions of intercepted messages for pre-programmed keywords or fax, telex and e-mail addresses. Every word of every message in the frequencies and channels selected at a station is automatically searched. The processors in the network are known as the ECHELON Dictionaries. ECHELON connects all these computers and allows the individual stations to function as distributed elements an integrated system. An ECHELON station’s Dictionary contains not only its parent agency’s chosen keywords, but also lists for each of the other four agencies in the UKUSA system [NSA, GCHQ, DSD, GCSB and CSE]”

So it does seem to be credible. I found the above link through Elizabeth Pratt’s blog The End Time where in one post she writes about Echelon and the computers and how easy it will be for a one world dictator to force everyone to carry the mark of the beast. With GPS and satellite surveillance, with the government having the ability sift through all electronic communication…they will be — maybe already are — able to keep tabs on everyone, and I would even guess using satellite surveillance and/or infrared they could find those without the mark (since they’d show up as a warm body without the proper signal from their implanted microchip”) so they can round them up for “beheading”. Elizabeth quoted from Rev 20:4 “…And I saw the souls of those who had been beheaded because of the testimony of Jesus and because of the word of God and those who had not worshiped the beast or his image, and had not received the mark upon their forehead and upon their hand…”and when I read it, I thought, Does it really say beheaded? Indeed, it does.

Well, I can see how a preference for caves and paper communication might develop in such times!

In any case Ms. Pratt has a lot of interesting thoughts and information, charts, maps, etc, so if you’re interested in seeing how close we are to being able to keep track of absolutely everyone as well as everything they are saying to each other, electronically, at any rate, I recommend her post.

Thankfully, all who’ve believed in Christ won’t be here for the actual Tribulation where they’ll be forcing everyone to get a Mark, but it’s amazing to see things that 50 years ago were unheard of, developing right in line with Biblical prophecy.