Over the weekend I received a comment on my post last week Demonism or the Depravity of Man? from a reader that raised a good point and which I’d like to address.

My reader said this in regards to the post:

“I can agree with you that people have a very misguided view of the innate goodness of man.

I’d have to disagree with Chafer about Satan. In John 8:44, Jesus says to the Jews, “You belong to your father the devil, and you want to carry out your father’s desire. He was a murderer from the beginning, not holding to the truth, for there is no truth in him. …” They wanted to carry out the desires of the devil and indeed they did most brutally murder him. That doesn’t sound like “And certainly he does not prompt them; for they are the natural fruit of an unrestrained fallen nature…”

Man is depraved and therefore a useful tool to carry out the devil’s desires.”

In my original post I was pointing out that contemporary portrayals of Satan and demons as vile, murderous beings bent only on gross evil and the torment of hapless souls were not accurate. To do so, I used some quotes from a book called Satan by Lewis Sperry Chafer.

But I see from the above-quoted comment that there is more to the matter than I discussed, and that Chafer has presented.

I think the best encapsulation of Satan’s nature now is that he is consumed with exalting himself and attacking God. He hates God and wants to do anything he can to thwart His will and plans. Satan wanted desperately to get our Lord to sin before he reached the cross, or, failing that, to kill Him outright before He could do the work He’d come to do. Because once Jesus Christ reached the cross and bore the sins of the world, it was over for Satan, although it’s clear he’s still in denial about that fact.

Currently he also attacks Christians, in whom God lives, in any way He can. He might use a religion to do that, such as Islam, whose Koran instructs its followers to kill Christians.  Or he might choose to do whatever he can to mess up their service and their witness, either by thwarting them, persecuting them, even killing them, or by drawing them away from truth with a counterfeit and duping them. These latter mostly involve the nice guy Satan, or, in light of having just watched The Incredible Hulk, how about the Bruce Banner version? 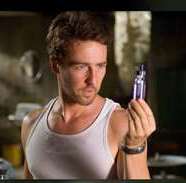 As he sees his time coming to an end however, (particularly in the Tribulation period), he will abandon his outwardly respectable veneer and show himself for the monster that he is, so unhinged he’ll order his minions to attack the very grass of the field, just because God made it.

Which would be the huge green guy version, going about roaring and smashing things in his rage.

I think he does like the good things, just as long as he doesn’t have to acknowledge them as coming from God. In fact, I think he even sees himself as good and right, someone who truly wants  to make everything in the world work well, because it reflects well on him as the leader. His goal is to be like God, as I’ve said, and thus to show himself able to do everything God can do. And before sin appeared, God’s kingdom was righteous and well-ordered.

But Satan isn’t God. So when things don’t go as he likes — as they inevitably will — he’ll throw a fit, and do whatever his deranged nature prompts in the midst of his fury. [Back to The Hulk again]. For now, being restrained by the hand of God, he cannot act freely, but during the Tribulation, when that hand of restraint is removed, and he grows more and more desperate to accomplish his goals, his true nature will be revealed.