“Mulling over the problem in a sort of chaos of ideas and knowledge, letting go of certainties… entertaining widely differing or incongruous ideas so they can coexist long enough conceptually in order to be considered as a new composition.” 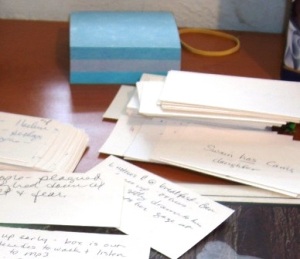 So when I am having a day like I described in the nonstops of yesterday’s post (Walking in Fog) or looking at the note cards spread across my desk and each one is an item that has little to do with any of the others, or there are clumps that relate, but no sequence that is emerging… they just are all there, like jigsaw puzzle pieces… I am in the process of entertaining differing or incongruous ideas together.

Incongruous: lacking congruity; not harmonious;  INCOMPATIBLE (not compatible: as a) incapable of association or harmonious coexistence; b) not conforming. DISAGREEING “conduct incongruous with principle”,  c) inconsistent within itself: “an incongruous story” d)  lacking propriety : UNSUITABLE “incongruous manners”

So if you have two ideas, say, “Abramm plans his way” and “He thinks about Blackwell…” those don’t, on the surface, have anything to do with each other. Nor does, “Trinley and Rolland argue about Abramm’s reign.” They are all three incongruous and when I think about it, I feel this frustration. Because I can form no connections.

Not that I’ve consciously tried to form connections, just that I survey the stuff and there aren’t any. So I’ve lately been just collecting it all into a chapter. Then I read the chapter and it jumps all over the place. Because there is no sequence, no organization. It’s chaotic, it’s a collection of different things, ideas, actions, feelings… sometimes they contradict each other. They can’t both happen, but I don’t know which one I want to happen. And it is very uncomfortable.

You’d think I’d have learned by now to get comfortable with it, but I haven’t. Reading files like this one, written as it was back when I was starting Return of the Guardian King is helpful.

As is the realization that this very thing that I find so frustrating is probably a key ingredient to making my books work. If I just laid down a simple sequence, chose a few things and went with them, I wouldn’t have so much to wrestle with. Writing would go more quickly. Unfortunately I would be very bored… which means my readers would also be bored.

And consciously trying to link my incongruous ideas not only won’t given me the final answer, but may lead me off on 100 page rabbit trails. I just have to resign myself to waiting until it falls together on its own, in God’s timing, not mine. Thus this stage will always be here, this mulling stage where I have the incongruous and widely differing elements coming together to form something new. I have no idea what that is, so how can I possibly guide it? I can only play with it.

And pray for guidance. And wait.