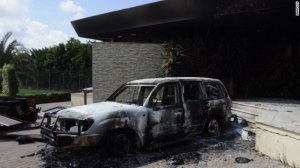 Well, I was going to talk a bit about our trip to the White Mountains today, but decided to put it off in favor of the accounting I just finished reading on the State Department’s official webpage (“Office of the Spokesperson”) regarding a blow-by-blow  (or “tick-tock” as the State Department official put it)  of the events of  the night of September 11 in Benghazi. This is a transcript of a “Background Conference Call With Senior State Department Officials” given to various invited news reporters back on Oct 9 which  has apparently just been released to the public.

It’s somewhat long, but it’s fascinating and so intense it reads like a Brad Thor novel. I highly recommend taking the time to read it all.

It also makes very clear 1) there was NO protest, unless you can call an all out armed attack on a US diplomatic compound a “protest;” 2) it was definitely preplanned (and it seems very likely, at least to me, that the perpetrators were specifically trying to murder the ambassador); and 3) the president knew exactly what was happening and that it wasn’t a protest about a movie since the security officer in the Tactical Operations Center on the compound had the White House on the phone from the moment the attack began — despite VP Biden’s claims to the contrary in that debate last week.

At the end of the two State Department Senior officials’ recounting, during the Q&A period, one of them, when asked if they should have prepared for such an event, said,

SENIOR STATE DEPARTMENT OFFICIAL NUMBER TWO: It is difficult to answer hypothetical questions, but let me just put it this way. The lethality and the number of armed people is unprecedented. There had been no attacks like that anywhere in Libya – Tripoli, Benghazi, or elsewhere – in the time that we had been there. And so it is unprecedented. In fact, it would be very, very hard to find a precedent for an attack like that in recent diplomatic history.

You can, and should read the entire transcript HERE. It will be very much worth your time.