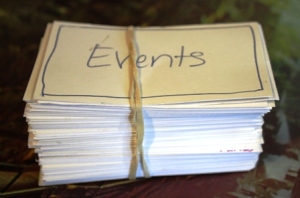 Well, finally, after all the catch-up I played last week after our trip, I’ve gotten back to work. It was a productive day!

When I started, though,  as I looked at the three hundred or so  2″ x 3″  cards scattering my desk, I felt quite overwhelmed. Over time I’d used them to note down ideas as they had occurred to me — ideas about character, about incidents or events that might happen, about a character’s intentions or desires or reactions… each to its own card, but the cards all in a jumble. All waiting to be put into some kind of coherent plotline.

Augh! How was I going to do this? It was all swirling around —  random events and occurences that seemed to have no relation to one another. I needed, so I thought, to form some kind of plot line, but I felt lost in a fog of indecision.

So I went to the Lord, which I’m doing a lot more now than I have in the past — about almost everything.

“What should I do?” I asked Him, wanting to run away from it all yet again…

Well, He drew my attention to the fact that I have three placemats on my desk and enough space for another, though I don’t have one.  That’s more or less 4 sections. I could at least divide up the stack into general sections…

So I took up my stack of “event” cards (above)

And began to go through them one by one… placing some of them on the “beginning” placemat, some on the “ending” space and  just parceling out the rest of them as seemed fit, more or less where I thought they would fit in the story. Some events were predicated on others, some had to come after others… Sometimes I had two cards with different options for the same event, mutually exclusive. Sometimes I had two cards with slightly different takes on the event, or different details or trappings for it.  I just laid them all down, some in rows, some on top of other cards, some bridging two rows. Some of them I even put between the placemats when I wasn’t sure.

It was kinda fun, because I didn’t have to decide, just generally divide up the cards. Some of them I even threw away. And it was something of a comfort to find that for several of the events I’d envisioned, I’d made two, three even four cards with the same event on it.

Once I had them all parcelled out, I divided them into four piles, which I gathered together in a rough approximation of the order they’d been placed on the table.

The operative word here is “rough.”  I was not demanding that I be precise and orderly, it was just to be a general dividing of the concepts. 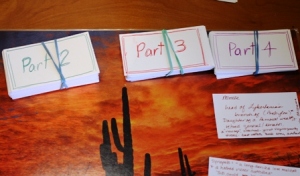 Above you can see parts 2 -4 all gathered up and secured with rubber bands.

Where is part 1?  Well, once I’d gotten all four of my stacks divided, I took up Part one and began to lay out those cards in terms of cause and effect, order, etc.: 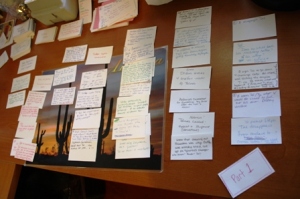 And having done that I have the beginnings of a line of events to work with. Nothing finished by any means but a start. There are lots of holes, and some of them are just ideas that need fleshing out. Some — those either/or cards — require a decision to be made one way or the other.

But that’s all tomorrow’s work. Oh, and I’m still loving my Freedom program, which I blogged about awhile back. That and turning off the phones, continues to give me what feels like a safehaven in which to relax and focus on the work… Plus something about the suspension of being available for contact motivates me to use the time to advantage rather than simply dink around.