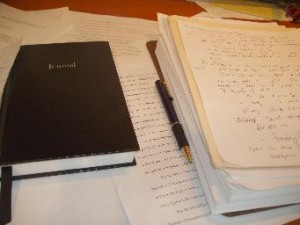 Back in February of 2006, when I began my first blog  (Writing from the Edge over on Blogger), I started out by saying that since I’d been keeping a writing diary for almost as long as I had been writing, it shouldn’t be too much of a stretch to start one online.

Thus the tagline for that blog became “The Writing Diary of Novelist Karen Hancock” and that was the fallback formula for the posts that I aimed to publish there. If nothing else, I could always put up a writing diary entry.

So, in view of my lengthy/erratic absence from the world of blogging, I’ve decided that maybe… just maybe… I can resurrect the spark by simply going back to that earlier format. For one thing, even though I haven’t been blogging, I have been keeping a writing diary.

Today’s entry began this morning at 10:19am…

I could’ve come in (to the office) at 9:30am, but my (retired) hubby came home and discovered the hawk has gotten another pigeon — my favorite pink/red one. 🙁  I believe it was female. It got her inside the broken down pigeon coop. And there’s an egg on the nest.  So that’s disturbing.  😥

Then I called our computer fix-it guy right after that about my computer issue (last week IE-11 refused to open in the desktop and was repaired; this week it refuses to open in the live tiles, but works fine in the desktop, which is really okay, because I can do everything I need to do through the desktop and furthermore I am declaring a moratorium on reading blog and news sites, but still… it bugs me that the program is not working properly). Alas, the computer guy had never even heard of that issue. I spent last week doing all manner of things trying to resolve the issue, including running the Apps troubleshooter, which gave me some error messages, which the computer guy asked me to email to him, so I did.

Anyway, then I hung out the laundry, and now I’m in here. Just read Sarah Selecky’s letter for today, “What I’ve learned so far about how to write a novel.”  Amusing and familiar and comforting. Also comforting is the fact that I’ve written 6 novels and am working on number 7 and I actually know more about it all than she does! (Seeing as she has yet to complete her first one)

It’s hard. It’s messy and confusing — in fact, she talks about confusing herself with all her notes written in little notebooks, and says next time she’ll use index cards. Ha! I confuse myself with my notes all the time and cards don’t help. (But it’s comforting to know other people get confused by their notes, too!)  I use business-sized cards to keep notes on… 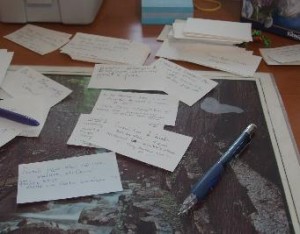 …notes about possible plot events, incidents, character bits, world bits, questions… The advantage (or disadvantage) is that you can spread out MORE of the little cards than you can the index cards, which ends up being even MORE confusing! Especially when I suggest on one card that Talmas should do “A” and on the other “Opposite-A.” Which I do. A Lot…

Sarah says she “can’t work with an outline and can’t work without one.” Yes, indeed. That is SO true. At least in the beginning anyway. You can only use a general outline then… because, as another writer put it,

“How can I know what I want to write until I see what I’ve written?”

For me everything kind of goes together — plot, character, backstory, events, incidents, the climax, the spiritual analogy — and so it must emerge together. Whenever I try to get hard-nosed about any of it, I end up running into walls.

Anyway, yesterday I worked on chapter 13, which at the start was 25 pages of confusing mishmash. I’m going slowly through it this week, editing, trying to find and fix what A/Not-A conflicts I could. In fact, discovering that I had portrayed one character as being of two different opinions in the same scene because I couldn’t decide which I wanted and just put them both in, very broadly, I decided today to just write it one way very clearly. That immediately showed me I didn’t want it that way, but the other way, so I went back and wrote it that way.

I’d forgotten that trick to deciding between two options when you can’t seem to do so: just pick one and “decide” to do it that way. Somehow going through the deciding and writing shows me just how committed I am to that option.  Coin flips work, too. Should this secondary character’s hair be blond or black? Can’t decide? Flip the coin and it comes up in favor of blond. Okay, he’ll be blond then. So off you go to write it thus and immediately you realize that no, he’s not blond at all, he has black hair…

Yes, I know. Writers are weird.

Anyway, I worked through about 7 pages today, adding two additional pages of material as I did so, leaving the rough chapter at 27 pages. So far.