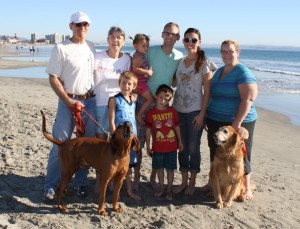 Last Friday morning I flew to San Diego to attend a baby shower for my daughter in law (“DDIL” in Flylady lingo) and soon to be arriving granddaughter (Will she be my DGD, then?  I don’t think I’ve seen that one show up in the digests). I arrived just after lunch, where my DDIL and her mother took me to lunch and then to… the BEACH!

Awesome. The dog beach on Coronado island, to be specific, right by where the Navy SEALS train and all sorts of interesting naval aircraft land… We spent most of the afternoon sitting in the sun and sand, visiting, and sometimes getting up to get wet (they did, not me) or talk a walk along the surf-line (that was me).  I had hoped to go the beach while I was there, but didn’t really think it would work out, given the timing and … it did.

To make it even better —  toward the end of the day two dolphins appeared out just beyond the waves diving in and out of the water… first time I think I’ve ever seen dolphins in the wild. Very cool.

By then my son had gotten off work and we met him at the house they just moved into last month– which has a yard that might actually contain Quigley when we come again to visit. After the tour, I unpacked the stuff I had brought with me for them — including some of my mother’s dishes they wanted but had never come back to Tucson to pick up when we decided to put off our planned memorial for her. I’d wrapped them in bubble wrap and put them in my suitcase but was uncertain if they would make it through the flight intact, but they did. Hooray.

Later we went off to a restaurant for foodies called Alchemy. I had never heard of “foodies” before, though I know I have seen them on the cooking channel my mother used to watch all the time: People who have a compulsion to put all sorts of weird foods together in the quest for something new and different. Folks in search of food adventures, as my son put it.

I had marinated medallions of beef that were very good, served over bok choy with kim chee that was… definitely an adventure in food. I think I don’t like kim chee, which is fermented cabbage with chili pepper flakes in it. I’m not sure about the bok choy. I thought it would taste like chard or spinach, but it had a strange flavor that reminded me of flowers or soap or something — that may have been the kim chee, as well, though.  Before the main course we had some small, sweet red peppers stuffed with pulled pork that were fabulous. And the cranberry bread pudding was excellent, too. All in all, a most excellent adventure.

Then it was off to check into our hotel on the water, where I had a room on the sixth floor overlooking the bay. Fantastic! And totally unexpected. Even though I knew the hotel was on the water there are as many rooms that look away from the water as look at it.

Next day was the shower, held in my DS and DDIL’s back yard under a tree with wonderfully twisty, interwoven branches. We ate chicken salad and spinach salad and watermelon and mixed fruit, with cookies and tortes and some yummy blueberry cake brought by some of the attendees. After that we played games — one involving candy bars smashed and melted in diapers (!) Though many of the participants couldn’t bear to look into the diaper at the stuff, I had no problem with that. Too many years cleaning up after the dogs I guess. My problem was that, though I was able to identify the ingredients of the various candy offerings, it’s been so long since I’ve eaten any candy bars I couldn’t remember any of the names.  Duh…

The shower ended around 3 and an hour later my son drove me to the airport where I flew back to Tucson. Arrived at 7:05 pm and was home by 7:30.

Shortest trip I’ve ever taken by air. But very fun and lots of great memories. I have, however, been pretty tired for the last two days…