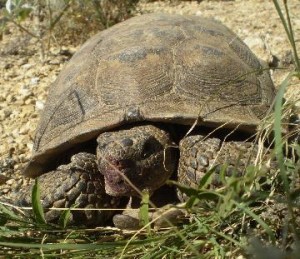 I seem to be moving like a tortoise these days.

Well, things were going well last week. Tuesday, Wednesday and Thursday I began to move — slowly — through Chapter 14. But then came Friday and my morning appointment with the eye doctor to make sure the shingles I developed in my eye a couple of years ago was still quiescent.

The appointment went normally, the news was good, but when I was driving home — slowly, via back streets — I noticed that everything seemed much brighter and blurrier than in the past. I chalked it up to the fact that it was a clear, bright day, whereas the last time I’d done it, the day had been overcast and I had driven home later in the afternoon.

But even when I got home, everything was so bright I had to close most of the blinds. And I could hardly even look at the computer screen, much less work on it.  Focusing on the small printed words of my hard-copy drafts was difficult as well, and I began to think my sight had degenerated much more than I feared (even though tests at the eye doctor’s had said otherwise). I could not work on the book at all:  couldn’t look at the computer screen, couldn’t stand to read the print on typed pages, was getting a headache just trying… so I worked on cards. And even that was a strain.

Finally, increasingly frustrated with my inability to see clearly I went into the bathroom to check on my pupil, thinking it was only the left eye that had been dilated, which was the usual procedure. Instead I finally discovered the problem: the tech had dilated both my eyes, by mistake, I think, since the doctor never looked in my right eye, only the left. In any case, there they were, these huge black pupils staring back at me. Even though it had been hours since the appointment, they still looked huge — which brings up another drawback to seeing the eye doctor in the morning rather than the afternoon: I have blue eyes and from what I’ve read,  dilation takes longer to recede in blue eyes than it does in brown eyes.  Indeed, it wasn’t until well into the evening before they were back to normal… and so, once again my intentions to keep consistent in writing this book were thwarted.

The next day, Saturday, I could see again, but now I had all the errands I might have done Friday but couldn’t, to attend to: dog food to pick up, dog bran to buy, a car gas tank on empty to fill up… administrative duties, etc. So no work then, either.

Today was our local assembly’s monthly communion and pot luck, longer than usual because we had a visit from some evangelist friends who minister in Pakistan. It was great to see and visit with them… but when I got home I was wiped out and so… yet another day where I didn’t get to the book…

Still I did manage to this post written!  So I shall feel good about that, at least…  I set all this down, as example of all the weird things that keep happening to interrupt the flow, consume time I’d hoped to devote to writing, and even get me off kilter. I keep asking myself, “Was it always like this? How did I get those other books written, anyway?”

Nevertheless, I do know that everything comes to me through my Lord’s permission, and for my blessing, even if it doesn’t seem like much of a blessing. He’s definitely teaching me patience. Or maybe I should say He’s giving me lots of lessons designed to develop it. I am just a very slow learner…

Well, the Lord seems to be helping me out with my blog/news reading intemperance. Which is nice, considering I asked Him to do just that. As usual, I am not surprised that He answered, merely by the way in which He chose to do so.

I’d been having great success with my plan of getting in at least 2 hours of writing time every day, and giving myself a star on the calendar when I meet that goal. I had six straight days the week before last, two this last week. In fact my writing block had just begun to give last Monday and I was excited to get to work Tuesday.

But then on Tuesday, for some reason unfathomable to me now, I decided before I got started to just take a quick look at Drudge… and Diplomad… and then Powerline… and then… there I went like the White Rabbit down the rabbit hole to Wonderland.

Several hours later, my eyes by then burning, throbbing and itching, I finally managed to convince myself that I wasn’t going to get the answers I sought from the news that day and likely never. For awhile I think I was looking at the scandals of Benghazi and Petraeus as part of some sort of riveting spy thriller, and was eager to get to the end of the story, were all would be revealed. But it wasn’t a novel. Or a movie. And in real life things don’t get revealed. At least not to the general public, or if to them then it’s decades later.

In any case, there I was, my thirst for closure thwarted with my eyes tired, but I still wanted to get in some more work on Sky. I did that — fulfilled my 2 hour goal, and then left to walk the dog.

By the time I returned home my eyes were burning like mad, feeling scratchy and even like something was in one of them. They hurt for the rest of the evening, and that night woke me up at 3am hurting. I got up to put some drops in, and went back to bed, wondering if I was going to be able to sleep at all – I was, eventually — and what I should do the next day if they continued to hurt. I was pretty sure it was eyestrain by then, but it still felt like I had something in my left eye. What if I did? And how would I be able to get in to see anyone on the Wednesday Thanksgiving?

Well, they were just as bad when I work up in the morning and I ended up calling the Nurseline that UHC provides. The nurse recommended I go straight to Urgent Care. Well, I had already somewhat triaged myself. There was no redness in my eye, no swelling, no discharge, no pain in my temple, I didn’t have a fever, wasn’t dizzy, and didn’t have double vision. The book I was using recommended rest, cold compresses and eye drops for dryness, not a trip to NextCare. When I asked her why she thought I needed more than that,  she said, “Because it’s your eye and we don’t know what’s wrong with it.”

Well, that was lame. So I called my optometrist, whom I’d just seen the previous Monday. He wasn’t there, but the optician who’d help me Monday was, and she agreed it probably was just overuse. When you spend hours staring at the computer, you tend not to blink your eyes, and they get dry. Then if you rub them, there’s the potential for scratching them. She’d heard these symptoms from many people and recommended I get some OTC gel eyedrops and use them that day and Thanksgiving, If it wasn’t better Friday I was to give them a call and get an appointment with the doctor. In the meantime, along with the drops, I should rest my eyes as much as possible and stay away from the computer.

So I did as she suggested. The drops helped a lot, and by Friday the pain had reduced considerably.  So I tried to use the computer, setting the timer for 25 minutes to make sure I stopped before too long. No need. After 12 minutes of reading just headlines, my eyes were throbbing and burning again and that was enough of that. They were uncomfortable for the rest of the day.  I didn’t try again until today, after Church. And even now as I’m typing this I’m closing my eyes.

Today, I tried earlier to read my blogs and news, and could feel everything heading south, so I quit. The discomfort arises to the point it’s not worth it to me to fight on through it just so I can read…. what? Some person’s opinion of the dire/messed up/stupid state of something? It’s the devil’s world. Of course things are going to be dire, messed up and stupid.

In any case, the result is that I haven’t really read any of my usual stuff, and the inclination is going away. I think I’ll be able to work on Sky tomorrow, especially if I do a lot of stuff with hard copy. Which is what I usually do.

For now, my eyes have had enough of even the partial staring at this screen I’ve been doing, so I’m going to quit and get this posted.