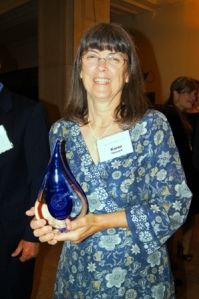 Since I did all that talking about my bungled acceptance “remarks” in my previous post, and because I rather liked having the opportunity to express my thanks publicly to some people whose support has been very significant over the years, I want to share it here.  And not only because of them, but because you all — my readers — are also among the “thankee’s.” It was supposed to be 1 – 2 minutes, during which we were encouraged to talk about what it was like in the beginning, a bit about our journey and what motivates us then and now to write:

“Well, I am deeply honored to be among the first inductees into the Christy Awards Hall of Fame, and a bit overwhelmed. No matter how many times I’ve been privileged to stand up here, it always seems unreal.

First I’d like to thank the Christy Awards organization for holding this annual recognition of excellence in Christian fiction. [Insert spate of blither about inspiring and encouraging authors here]

Thanks, too, to the Christy Awards judges for being so kind to my work over the years.

Second I want to express my deepest gratitude to Steve Laube, my agent and formerly my editor at Bethany House, and the one who opened the door for me. Despite hearing my nervous and rather lame pitch of Arena at Mt. Hermon many years ago, he still asked me to send him the manuscript!

I’m grateful as well to the Bethany House editorial board he presented it to, and who bought both Arena and, not long after, my fantasy series Legends of the Guardian-King. They were taking a big gamble back then. Science fiction and allegory were still very questionable venues for Christian fiction. Fantasy was even worse — “a death word” in the industry, Steve told me.

So I took to calling it “Speculative Historical fiction.”

Nevertheless, Bethany House took on all five books. So to Carol and Gary Johnson and the others on that board — thank you for your vision and courage in taking the risk that you did and then in continuing to believe in my work as the years have passed.

I also want to give a huge shout out to my editor, Karen Schurrer, who has worked on every one of my books. — What a joy and blessing you have been to me! — In the beginning it was unnerving to think of someone else making changes to my work. But Karen was so patient with me, so good at what she does that now I can’t imagine not having her there to find all the clunks and logic gaps and wrong turns and to gently suggest I take another look.

Finally, I am thankful for and to my readers whose enthusiasm and support have shown me that I actually am accomplishing what God has called me to do: provide spiritual encouragement and edification through story to my fellow members of the Body of Christ. It has been a pleasure and a privilege to serve them in this capacity.”

Thanks to all of you! 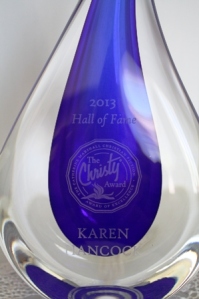 Close-up of the engraved words: 2013 Hall of Fame, The Christy Award, Karen Hancock