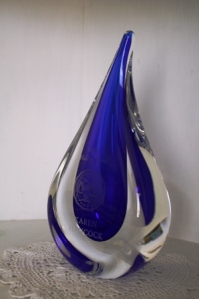 My Christy Hall of Fame Award at home

Okay, so the entire reason for my going to St. Louis was, as I mentioned, for me to be inducted into the inaugural Christy Award Hall of Fame, along with Historical novelist Lynn Austin. And so far, I’ve said nary a word about it.

Well, the dinner/awards ceremony was held in a ballroom … or at least, I think it was a ballroom — we weren’t exactly sure for what purpose the room had been built but it had a high ceiling and floor to ceiling windows, as well as tall, squared- off columns. And yet… it was very long and narrow, almost as if it had once been part of a larger room, and was walled off to increase the number of spaces the hotel could offer for events.  In any case, it was an elegant if echo-y room, with a very lofty ceiling.

This might be the room — the windows and columns look right…

The reason I can’t recall the exact location is that I didn’t know it beforehand, and when my husband and I arrived, we were late. We were supposed to have been early, because I was to be participating in the presentation of the awards to this year’s winners and needed to receive my instructions…

We would’ve been on time, I think, except for the GPS.  I knew where the hotel was, but my hubby had brought our GPS, so we were planning on relying on that. But when we left the garage, the GPS became terminally confused. It was determined that we should “turn right on 7th street” even though we were past 7th street. As it repeated its command to turn right, the screen declared that the Garmin was in fact, “off.” Even as it was on.

Okay. So we tried to make our way through the maze of one way streets, and I thought I had a clear idea of which way to go, except then the street I wanted to turn down had suddenly been blocked off and … by the time we arrived, I’d keyed myself up in that Introvert state of Overwhelm. As I said, I was supposed to have arrived a half hour early to meet the banquet organizer “by the podium” for my instructions. But when I got there, late, there were tons of people already there, and I had no idea where I was going. I spotted a familiar face and asked if he knew where the podium was… and only gradually did I realize I’d asked the former president of BHP, now retired, Gary Johnson. He was very gracious — and helpful — nonetheless.

Eventually I made it to the correct room — all my angst had been utterly without justification (as is so often the case!) — but that is why I don’t know what room we were in!

Anyway, it was a fun evening — despite the fact I had to give an acceptance speech. I had one written out when I left Tucson, but every time I went through it for practice in St. Louis, I kept changing it – via hand-written insertions since I had no computer. For some reason I thought it would be bad if I just read it, so I was trying to memorize it… and there was one particular spot at the beginning where I kept going off script because it felt like there was more to say, even if I couldn’t think what.

Anyway, instead of freaking out about it all, I gave it over to the Lord to handle (Casting all your cares on Him, for He cares for you) and asked Him to give me the words He wanted to me to speak and not let there be any huge bungles in my delivery.

So I got to sit with my editor, Karen Schurrer, my agent, Steve Laube, the Editorial Director of Fiction, Dave Horton, and BHP’s Executive Vice President and Director, Jim Parrish, all of whom are really awesome people to work with. Lynn Austin with her hubby, Rachel McCrae, a book buyer with Lifeway, and the director of the awards, Donna Kehoe rounded out the rest of the folks at our table, though Donna spent almost the entire dinner hour away from her seat, working out various details.

After the presentation of the 2013  Christy Award nominees, agent Chip McGregor gave an emotional tribute to his friend and colleague Lee Hough, and presented him with a Lifetime Achievement award in the field of agenting.

Then it was time for dinner, where I talked far too much and ended up hardly eating much of my food at all… but I can always eat and I can’t always talk to the people who were with me. At least not face to face.

After dinner, the Induction into the Christy Hall of Fame began.  I went first, made it to the podium without tripping, notes in hand, and started in with my spiel. Then I looked up from the notes and was suddenly ad libbing in that area at the beginning where it kept seeming like I should say something more. The next thing you know I heard myself LITERALLY babbling, making no sense whatsoever! Here’s a pic my hubby took of me, so rattled, the camera couldn’t focus:

Me rattled during my unplanned spate of blithering

Fortunately I had the sense to cut it off immediately, but not without observing out loud to everyone listening that “I’m babbling. I’ll stop now” and went on to my prepared remarks. Which I think went well, in spite of everything. I should have known before I tried it. Yes, it’s true, I’ve ad-libbed in the past and had no problem. But now that I’m older, the words are no longer coming as swiftly as in my youth. And the words that do come initially are often the WRONG words. Which is what happened on the podium.

If I ever have to do something like this again, I have learned that I MUST stick to the script. Anyway, no one threw anything, and I didn’t collapse from the horror of it so… I guess it’s okay…  Here’s a picture of me right after, receiving my award (courtesy of Becky Miller — Thanks, Becky!)

Me receiving my Hall of Fame Award from Donna Kehoe