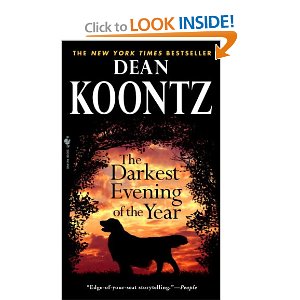 In keeping with my theme for the week of dog related posts, I thought I’d put up my thoughts of that Dean Koontz novel I mentioned having read last week.

Published in paperback in 2007 Koontz’s The Darkest Evening of the Year is first off a paean to the Golden Retriever in particular (They sound like fabulous dogs — except for the hair) and dogs in general.

He also touched a bit on his “dogs are the way to redeem a wounded/wretched/evil soul” theology which I first encountered it in One Door Away from Heaven. That was more in passing. This is much more developed.

Not to say I didn’t enjoy the book. I did. (Quigley is SO not a Golden Retriever!)

Since Koontz is now on his second Golden, and works with the organizations that provide service dogs to people with disabilities, I am sure he knows what he’s talking about when it comes to the temperament and behavior of the breed. I mentioned in my previous post about the Wonder Dog Chancer, that 70% of Goldens, Labradors and German Shepherds pass the service dog training course, whereas only 2% of other breeds do. I doubt any hounds would ever even be considered. I cannot imagine Quigley sitting patiently on the patio deck, unleashed, waiting for “permission” to join his friends frolicking in the water as the Goldens are said to do in this book.

The only time Quigley sits patiently is at dinner time when he sits between my hubby and me watching us eat, waiting for the moment we are done and the plates will go into the dishwasher whereupon he will attempt to get in a few licks…

But I digress. I read the book mostly in one day and finished it up the second night. I was never bored, I didn’t think it took too long to get into… in fact, I loved his wordcraft. Here’s the start:

Behind the wheel of the Ford Expedition,  Amy Redwing drove as if she were immortal and therefore safe at any speed.

In the fitful breeze, a funnel of golden sycamore leaves spun along the post-midnight street. She blasted through them, crisp autumn scratching across the windshield.

I wept unrestrainedly during his depiction of the euthanasia of the above-mentioned Amy Redwing’s first retriever. The whole thing was so much like what I went through with Bear, it was like living it again… Very poignant. Very well done.

And despite Koontz’s weirdness regarding the spiritual efficacy of having a relationship with a dog, there was a place where, though at first his character ridiculed the idea of the Rapture, he nevertheless got the point of God’s perfect righteousness dead on:

…if God existed, a God of pure love, then for sure there had to be a purgatory, because you would need a place of purification before you dared go upstairs for the Ultimate Hug. Even a sweet woman like Mrs. Bonnaventura, rapturing directly from this life to God’s presence, would detonate as violently as anti-matter meeting matter, like in that old episode of Star Trek.”  (pg 173-4)

Cool! Exactly why Jesus had to become a man and go to the cross and why God had to create in us a new creature at the point of salvation,  give us His righteousness, and will make for each believer a new resurrection body for eternity. Because we ALL have sinned and come short of the glory of God and there is none righteous, no not one. (Ro 3: 1o;23)  I’ve thought before that sin and God are sort of like matter and anti-matter… Except that only the anti-matter (ie sinful creature) would detonate when it came into contact with God because God is immutable.

Of course that wasn’t the direction that Koontz took the matter, but it’s exciting to come across a statement of truth like that when you’re not expecting it.

The story centers around the special Golden Retriever Amy Redwing rescues from an imminent beating at the very beginning, who was…

…I guess, possessed or indwelt by the spirits? souls? of her long-dead first dog and baby daughter. At the end this special Golden with subtle supernatural powers resuscitates the heroes who have both been killed in their attempts to stop the villains.

Readers on Amazon didn’t like this and many complained bitterly, calling it a hideous Deus ex Machina. Except technically, I don’t think it was.

As I understand it, the term comes from the Greek dramas where everything would be going wrong by the end of the play, and then the god would be lowered in on a platform to clean up the mess and restore order. But in this case, by the time of the resuscitation, the story was over, the problems solved, the villains dealt with. Yes the resuscitation definitely made for a happy ending, but I think it also played along one of the main threads he’d been weaving through the story. That is, that there are forces beyond our ken, that there is divine grace and a purpose to this life.  There are second chances.

The villains were all about living in the moment because, they thought, there was nothing else. No God, no mysteries, no meaning, only self and satisfying self.

In that it fit right in with messages I’d been receiving from my pastor shortly before and while I was reading the book. About the old man, the one that’s been crucified with Christ, and how it’s only and always about self. What’s in it for me? How do I feel? What am I going to do? What did I do wrong? How can I do better? What do I want? What did I not get? Etc.

To be sure, the villains in this piece were not that introspective, but even that was more in keeping with their in-the-moment approach. They were more like, “I want to [have sex/ eat a sandwich/ torment a child/ go to the desert/ burn down a house] right now.” So they got up and did it. Now. They also thought way more highly of themselves then they ought, but that’s typical of villains.

Anyway, I think this last quote encapsulates one of the book’s main themes and one of the things I liked most about it:

“Born in a tornado, Brian had considerable respect for the chaos that nature could spawn and for the sudden order — call it fate — that was often revealed when the apparent chaos clarified.”

Which has kind of been playing out in my life lately — especially in my writing life!