My daughter-in-law sent me the link to this video. Perhaps you have to know dogs and dog parks, but I think it’s hysterical. 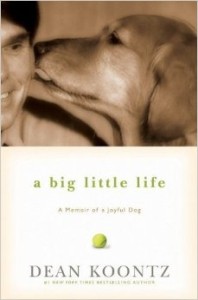 A Big Little Life: A Memoir of a Joyful Dog by Dean Koontz.

My son got me this book awhile back and recently I finally had opportunity to pick it up. Yes, my “To Be Read” stack is a mile high, but Dean Koontz and his Golden Retriever, Trixie have a special place in my heart. This is not only because I’ve read many, many of Koontz’s books, always admired his writing and even used it as a “model” to study for my own, but because he is also a fellow dog lover. I’ve been subscribing to his Useless News newsletter for years, wherein Trixie always made an appearance, usually funny (she was even a ‘writer’ in her own right, with a few articles in the News and several published books to her name), and through that I came to “know” her.

In fact it was in an issue of Useless News that I learned she had died, about a year after we’d had to put Bear down, so when I got the book, I didn’t know if I wanted to read the story — knowing how it ended — until I had a bit more distance from our own event. In fact, as a kid I used to check the ending of all books that featured a dog to make sure the dog didn’t die. If it did, I wouldn’t read the book. (Which is  why I’ve never finished Swiss Family Robinson and why I’ve never read Where the Red Fern Grows or watched the movie based on it (that one made doubly onerous not only in that the dog dies, but that the dog is a Redbone Coonhound!).

Anyway, I finally had an open spot in my reading list, felt as if I was ready to tackle going through that and picked it up, thinking I’d only read a chapter.

In fact, I did manage to read it with a bit of control through the first chapter or so (at the Y, while riding the stationary bike, as I recall). But it wasn’t long before I was hooked and put in one of my all day reading jags. I think I finished it maybe two or three days after I started it, though I read the bulk that last day.

Oh my. What a wonderful book! I LOVED it in so many ways. Yes, the end with Trixie’s death was horrendous — way worse than Bear’s. I bawled outright — for quite some time. I even had to go demand a hug from Quigley, which he gave reluctantly. (He doesn’t come over to comfort you when you’re upset like Bear used to. In fact, he even pulled away a little, but relented at last. Admittedly I was acting very weird, as far as he was concerned.)

Anyway, Trixie was indeed a wonderful dog. And I think Koontz is right in his assessment that God used her in his life to pull him back from the dark, increasingly negative path he was following when she arrived. She was a purebred, but an adoptee, having gone through the entire training sessions for being a service dog, only to wash out before she ever went to work when a  congenital problem with her elbow surfaced. Since assistance dogs might sometimes have to pull the wheelchair of the person they are assisting — or even bear the weight of the person themselves, they can’t have finicky elbows that might go out at the worst possible moment. Thus she was put up for adoption and Mr. Koontz and his wife got her.

Of course the memoir centers on her, and Koontz does a fantastic job of conveying the wit, the exuberance, the intelligence, the grace — the loving nature — of this wonderful animal. That would have been enough to make the book remarkable, but it also had much else of interest to me in particular as pertains to Koontz’s writing life, his habits, his having to deal with weird fans,  what his office is like, how he works. (His wife, Gerda, handles all the finances and he has a close-to-full-time assistant to do the correspondence, answer the phone, deal with publishers, movie people, agents, the above mentioned weird fans, etc.) And yes, he is a workaholic. So is his wife. I knew that he put in 14 hour days before I read this, but now I have a much better idea what that means.

Still, it’s plain he loves what he does. In fact, the only time he’s ever suffered writer’s block was in the weeks following Trixie’s death.

(And now I can no longer take myself to task for not putting in 14 hour days as well, because I do not have an assistant, a finance officer, a cook, a housekeeper, or a gardener. He did not, however, have a dog walker — he and Gerda did that, one going in the morning, the other at night.)

Anyway, I found it all fascinating, funny, learned a lot about his past and present (which gives insight into why he writes what he does) and as I said, just thoroughly enjoyed this book. Koontz is a wonderful writer, personable, entertaining, his writing heartfelt. I think that comes through in all his works, and is part of why I enjoy his novels so much, even though I don’t care for horror novels (or however his novels are categorized — I think they are in a class of their own). In any case, if you like dogs, or are a writer, or want a glimpse of what a fairly humble, best-selling novelist’s life is like, I highly recommend you read A Big Little Life.

The New 2014 Superbowl Budweiser Commercial was leaked/released early and went viral today.  I LOVE it. Makes me cry every time. In a good way.

My husband sent me this. I think he got it off Facebook.  Subject line: “Picture you can Relate To”

“Show me belly” is one of my favorite Quigley tricks!  He so cute!  We have been working on saying grace before he eats and he’s doing well.

But that’s just fun stuff. What I really want is for him to learn to go to a place in the living room when someone knocks on the door and to lie down there and stay. As opposed to jumping all around and on the hapless guest who enters. He weighs almost 90 pounds so having him jump on people in exuberant abandon is not a pleasant experience.

So we’ve been working on it,  It’s not coming easily, especially not getting him to go to the particular spot I wished him to go to. Remembering there is a “trick” called “going to a mark” I searched the internet and came up with the following video by Zac George:  How To Teach Your Dog to Go to a Spot.

Zac’s very enthusiastic and his dog is very quick and attentive and energetic — one of those cattle herding dogs that are smart and bred to work well with people, making frequent eye contact– as opposed to hurling themselves headlong into the woods and across the hills on a scent trail,  bellowing all the while like hounds were bred to do. (They actually have a contest of who can jump up on the tree and bark the most at coonhound field trials. Quigley has potential to do quite well in that one…)

But I digress…  Quig did pretty well with the touch the towel thing that’s taught in the video and we’re moving along on the touch it and lie down part. I thought the video was so entertaining, some of you dog lovers might enjoy it as well…

Well, after all those serious posts about confessing sins, it’s time for something lighter.   How about this video of dogs saying grace?  I’m already working on teaching Quigley this…

I mentioned a couple of posts ago that my hubby’s aunt had died and they were having a memorial service for her in Moab which we were considering attending.

Since it was “only” a nine-hour drive (without stops) we decided it was doable and left early Friday morning, heading out of Tucson fairly early. The memorial service was Saturday, and we drove home Sunday. With stops, the trip was twelve hours. Which wasn’t bad, but left both of us pretty tired Monday. I did nothing but lie around and it wasn’t until Tuesday that I began to put things away, try to get caught up on the things that didn’t get done and fuss about my rose bush.

I’d asked the neighbor to water, which she’s done many times before but somehow a soap can lid fell down behind the gate she needed to open and got it jammed so she couldn’t get in. Talk about weird… The result was that neither of the roses got watered for two days, during which our humidity was something like 13% or lower and the dew point was practically zero. One of them was droopy but recovered. The other lost almost all its leaves. It was very, very sad.

But after watering, fertilizing and laying down some mulch, it looks like it will survive… new leaves are now sprouting, so I’m happy about that.

In any case, that along with all the other things, which seem like nothing but end up taking up the minutes, took most of my time last week. Plus, Monday was Memorial Day and my hubby was home… so not only did I lack the time, quiet space and mental energy to write a blog post, I did no work on Sky either. I’m hoping to get back to it tomorrow, however.

For now, I thought I’d share some shots I took from our trip.

Traveling through Monument Valley I was shocked to see the rash of the white trailers and various structures which had sprung up at the bases of the rock formations. From a distance it looked like a scattering of trash. If only they’d painted their trailers and structures a color more like the surroundings… Ah well, I guess there’s no place left that’s immune to development these days. Maybe the Sahara Desert. Or the Gobi…

Redrock cliffs in the waning sunlight as we neared Moab

Driveway and cliff view from the house of hubby’s relations where we stayed.

Fabulous log fence and field of yellow flowers nearby.

Amazing cottonwood tree on the grounds of our hosts 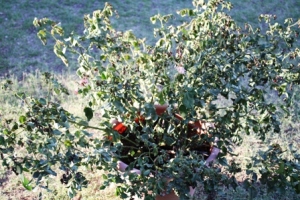 my poor sad, dried up rose as it looked when we first returned… 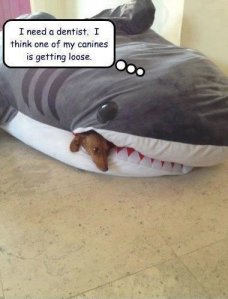 A fellow dog lover sent me this. I’ve now watched it numerous times. I laugh every time.  At first I just enjoyed it for the “acting.” Now I enjoy it because it’s fun to watch the dogs being dogs, while the people try to keep them in “character.” I’m also trying to teach Quigley to eat off a fork. So far, he’s not caught on.  [If for some reason the video is not appearing below, click on the title of this post to go to the post itself and hopefully you’ll find it.]

This is Quigley after he’s gone out and rolled in the grass this time of year. Everything is very dry and staticky, so the pieces of grass stick to his coat and are very difficult to wipe off. I use a damp microfiber cloth but even then pieces remain and often merely transfer from him to my pants. 🙁