—What Does the Fox Say?

At least it was back before Halloween, and dictated the costume she chose to wear for that event: a fox.

“Watch fox movie, Mommy?” she would repeatedly ask in the days leading up to Halloween. Her mom would turn it on and she would dance and sing along.

My son sent us a link to the video and of course we watched it right away. My first reaction was… wow. This is very weird. This is … just very weird…

But then, for some reason I wanted to watch it again. And then again. And, well… many more times for several days.

It’s “an electronic dance song and viral video by Norwegian comedy duo Ylvis” according to Wikipedia, and was debuted on the Internet in September. It is now nearing 250 million views. The brothers have a comedy talk show in Norway, and yet are very good singers.

After you watch it a time or two, it stops being weird and starts being fun. I totally understand why Lily likes it. I would have shared it sooner, if I’d had a properly working computer and blog to do it with.

So, without further ado, I present “What does the Fox Say?: 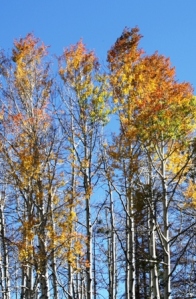 Last weekend, as I mentioned in an earlier post, we gathered together with my son and his family, and my sister up in the White Mountains.

When my son was growing up and we were home schooling, we used to take an annual trip up to the White Mountains to a place called Big Lake where we camped for about three days, enjoying the changing of the aspen. My mother always went with us and my sister drove in from New Mexico to join us.

We have all sorts of good memories associated with these trips, and my mother especially enjoyed them, so we decided to have a trip in memorium for her.

Originally we were going to do it last fall, but after the Wallow Fire  blazed through there last summer, we decided to wait a year.

We had never camped in an official campground, but in our “own” special spot off the road to Big Lake. There was a pipe spring there, an old cabin, and a glorious stand of aspen — in addition to expansive views of the open range, which my husband glassed morning and evening for antelope and elk. (Click to enlarge all photos)

It was a place far enough away from the roads we could let our dogs roam free, and they loved it, too. We camped, roasted marshmallows, took hikes, sketched, painted, and took lots of photos. Sometimes in the wee hours of the morning, we even heard the elk bugle as they came out in the fields below us to challenge one another.

Though I had prayed the Lord would spare it, we had no way of knowing if the place was even still standing, for the fires had raged right through that area…

Given my son and his wife had Lily, only a little over a year old and would be coming from California, we opted for staying in a condo in Pinetop and driving out to spend the day at our spot rather than camping as in the past. I think it was the right decision.  We had a wonderful time.

Here are a few more pictures: 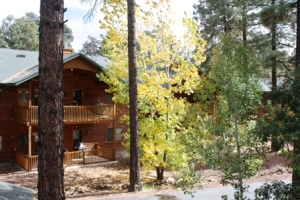 View from our cabin in Pinetop. I love the way the aspen leaves flutter to the ground in the wind which you can almost see in this picture.

Lily walking like a pro. She and Quigley became friends and cohorts in making trouble. She opened the drawers and doors and he took full advantage!

En route to our “spot”: the fire had raged through much of the forest, leaving skeletons of burned out trees

Thankfully we found our spot mostly untouched, complete with the cabin my mother, sister and I had sketched many times

The trees nearby were also still standing unharmed, and the aspen were midway through their autumn display

We saw this guy at the end of the day as we were driving out. Great finish to a wonderful day.

Well, I didn’t get my photos downloaded and ready as soon as I expected. Yesterday I spent putting stuff away, washing clothes, talking to friends and lying around, zonked. I did get the pics transferred from camera to computer but that was about as far as it got.

So I’m a day later than I’d planned, but better late than never. Here are some highlights from our summer trip to San Diego to visit little Miss Lily.

And her parents of course!

Our Next House! On Coronado Island, right near the dog beach!
Hahahaha!! We wish.

Who’s at the door?

Fun at the Beach. (Note Quigley is expressing his opinion, too. He loved the beach.)

I’ve been away from my office and desk and well, Arizona altogether for the last week. It’s been something of a milestone in that for the first time I also managed to put up some blog posts, even though I was away from my computer. (I’m from the Jurassic age and do not have a cell phone, let alone an ipad.)

Anyway, much thanks to my son and daughter-in-law for allowing me to post from their computer.

I haven’t yet uploaded the many pics I took while away, but will do so tomorrow and then figure out which I want to post. There are sooo many good ones to choose from.

Lily is walking now. Only three steps at a time, but all on her own. If she has someone to hold her hands she’ll walk all the way across the living room, dining room, into the kitchen and back again. Two little teeth showing. Big blue eyes. Bright, happy smile. Wrinkly nose… Cuter than ever.

DS and DDIL (that’s Flylady lingo for “Dear Son” and “Dear Daughter-in-Law”) were in the midst of moving from their previous location to a new larger place two lots up the street. Hubby and I (and Quigley) stayed in the older, smaller house and we all spent a lot of time walking back and forth (partly because the washer and dryer were still in the smaller house and they have lots of diapers to wash… plus that’s where the computer was! ) Hubby left on Monday, and I stayed an additional three days, then flew back this afternoon.

So, as I said. I’m tired. This pic from last winter expresses it perfectly: 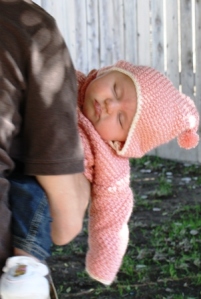 Time for the four-month photo collage of my grand-daughter Lily, which her mother made  a few weeks ago. Again, too cute not to share. But also, I noticed how her coloring has come to look like her daddy’s.  So I’ve put up one of his pics afterwards from about the same age.  (Though her mama also had blond hair when she was little. As did I, and now our hair is dark. So I guess time will tell). 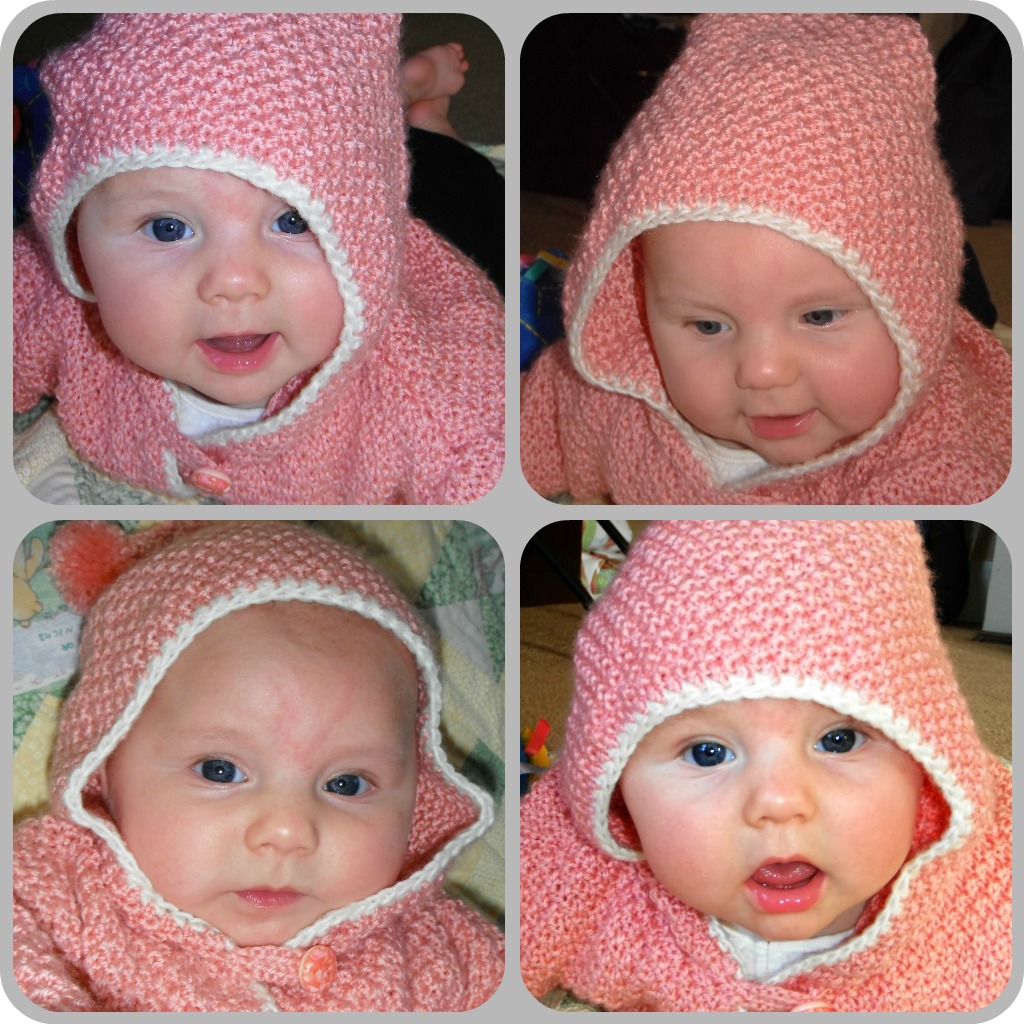 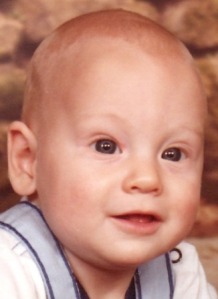 None of these photos as they are coming through in this post does justice to the BLUE of those blue eyes!

Well, we left last Friday for San Diego and our first visit with our new granddaughter. We spent Friday evening, all day Saturday and a brief bit of Sunday morning with the new parents and Lily. She is very cute. And sooo helpless. I’d forgotten how helpless we are as newborns. Although, at a bit over a month old, Lily’s not quite a newborn any more.

I think the parallel with a baby Christian is more apt than I ever did before. Lily can’t yet hold up her head, her arms thrash about, she can’t walk, can’t sit up, can’t roll over. Can’t really understand language. All she can do is eat, make messes, look about and be cute for a few moments, then cry and fuss and sleep and start the cycle all over again. The main thing she does, though is eat. And grow. And learn.  She’d have a hard time driving a car, or doing surgery! In fact, it would be impossible. So it is with the Christian life. Too often, as new Christians  I think we expect to be able to do things early on that only come with time and spiritual maturity.  Yet, when we look at a baby, we see there is literally no way she could do what she will be able to do when she is grown.

Well, I have been wiped out for two days now, and have done little more than put away trip stuff and basic morning routine. I expected that on Monday. I didn’t expect that today. I’m hoping tomorrow I’ll be a bit more energetic — enough to actually get back to work on Sky. Tonight I had already given up on the idea of getting a post up, but suddenly I had a window of time and an unexpected burst of energy.  So here are a couple more pictures. 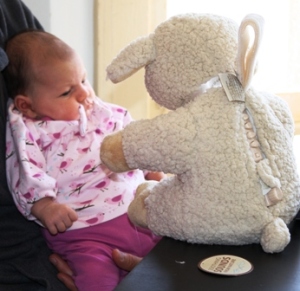 Lily and the Sleep Sheep